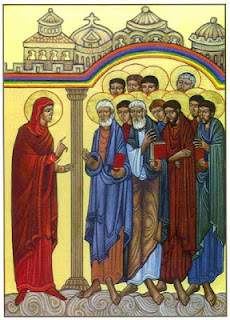 It can be hard to be all that enthusiastic about the joyful news of Easter when you’re very used to the story. Some of you might have been here for the first Eucharist of Easter last night when we welcomed the risen Lord. For others, Easter might have come around all too soon. “The Lord is Risen! He’s risen indeed… again…”. If you don’t feel that way right now, I guarantee that in seven weeks time, when we are still greeting each other with “Christ is risen!” you will. Well, for the Easter weary, the Gospel of John is just for you.

There is no suspense in John’s story of the first resurrection encounter. As we read it, we don’t have to try to pretend that we don’t know how the story is going to work out. The power of John’s story about Jesus’ encounter with Mary Magdalene is in the lack of suspense. We know that Jesus is risen. We know that Jesus is the gardener. Generally, when John looks at the resurrection, he looks at it from the perspective of how people respond to encountering the risen Jesus. So the power of the story we read this morning doesn’t come from our gradually realising the awesome reality of the resurrection, but by seeing what it is that leads to Mary recognising Jesus and how she responds to him.

Some of you might know that my greatest theological hero is thirteenth-century priest called Thomas Aquinas. Aquinas wrote some of the most breathtaking theology the world has ever known.   His work was breathtaking not only in its complexity and brilliance but in its magnitude! His longest work was the Summa Theologiæ, and it’s massive. Aquinas never finished the Summa. And this is the story of how he came to stop writing. On St Nicolas’ day 1273, Aquinas was presiding at the Eucharist and heard Jesus speaking to him, from a Crucifix. Jesus asked Aquinas if there was anything he wanted. Aquinas answered, “Only you Lord, only you.” And from that moment he never wrote again, he wouldn’t finish the Summa, nothing. All this was much to the annoyance of his assistant Reginald of Piperno, who asked why Aquinas wouldn’t finish his work. Aquinas replied “Reginald, I cannot, because all that I have written seems like straw to me.” Three months later at the age of 49, Aquinas died. He’s called a doctor of the church. I like to think that its not because of the theology he wrote, as marvelous as it is, but because he came to realise that words on a page can never be a substitute for hearing Jesus call your name.

This really is the first question we need to ask in response to the story of Mary Magdalene hearing and seeing Jesus: how do we here him calling our name? Do we hear him calling our name? It doesn’t matter whether you hear your name being called through liturgy, or through incense or through the beauty of creation or other people or breathtaking theology or whatever, the important thing is that you hear it.

But in this wonderful story we don’t just see what leads Mary to recognise Jesus, we see how Jesus responds to her reaction. It seems as though Mary probably fell at Jesus’ feet and embraced them (Mt. 28.9). She was so overwhelmed with seeing him that all she could think of doing was holding his feet.  At this point though, Jesus says something strange, “Do not hold on to me, because I have not yet ascended to the Father.” Jesus is in the process of ascending to his Father in heaven, so Mary’s relationship with Jesus is going to have to change because there’s going to be a time when she won’t be able to see him, or hear him, or touch him. Instead, Mary is given a job to do. She has to go and preach the good news of the resurrection to Jesus’ disciples. Mary Magdalene, the first Christian preacher of the good news of the resurrection.

As important as it is to hear Jesus voice calling our name in some way, it’s equally important that we learn to grow from that experience. Mary heard Jesus calling her name, but the calling went much deeper. It was a call on her entire life. A call to testify to the resurrection of Jesus. A vocation. Are we tempted to hold onto Jesus? It might be that we are content with coming to church, or praying, or reading the Bible because it helps us know that we are God’s beloved children, and that’s great. But sooner or later Jesus is going to say to us, “don’t cling onto me… go… share”. The message of Easter to Mary Magdalene whilst it was personal, wasn’t individualistic. It was personal but it wasn’t to stay personal, it was a message to be shared. And if we are going to be people who follow Mary, we’ll follow her in sharing the good news of the resurrection.
Posted by Barnaby Perkins at 2:46 pm