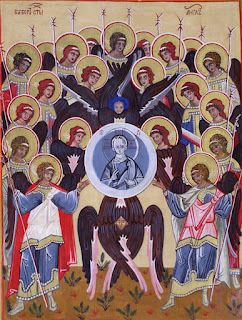 One of the greatest crimes of which popular culture is guilty is the emaciation of love. Hollywood, Mills and Boon and a thousand thousand love songs have reduced love to the merely romantic; to an obsession with emotional or erotic hungers being satiated. Given the evacuation of meaning and depth from our understanding of love, Jesus’ command to love one another as he has loved us might seem strange. We know it must be important. We may even suspect that it has something to do with self-sacrifice, but beyond that we tend to be quite clueless. Our conception of love tends to be obsessed our needs being met, love for many has indeed become what Antoin de la Salle once called egoisme a deux, a quid pro quo for the satisfying of our need to be adored.

So in a world where the very idea of love has become bland, the question this text provokes is, what precisely is the love which ought to characterise the Christian community? How does Jesus want us to love one another?

The first thing that we notice about this love is that we have an example to follow, we are to love in the manner in which we have been loved by the Lord. God is Love, John tells us elsewhere, but by this he does not mean that God is a seething mass of inner emotional turmoil. God’s love doesn’t emotionally respond in an all too human manner to the loveliness of the beloved. God doesn’t love us because he needs to love us. God is eternally happy in himself. He is the transcendent perfection from which all creaturely love flows. God is pre-eminently love. The love with which God loves us, therefore, depends neither on a deficiency in the lover which needs to be compensated for, nor a worthiness in the beloved which compels adoration. We are loved simply because God chooses in his goodness to do so. God loves us because he wills to love us.

And so the love we are to show is to correspond, albeit in an imperfect manner, to God’s love. Our love for one another is not, in this sense primarily emotional. When we are presented with the imperative to love one another we are not being commanded to whip ourselves into an emotional frenzy. The type of love that should characterise the Christian community is not a love that depends on feeling love for the other. Jesus isn’t commanding us to get doe eyed with our neighbour. It is a decisive and active love. A love which responds to the other out of the sheer goodness of loving, out of our desire to be perfect as our heavenly Father is perfect. And so, just as our love is not to be the result of an unmet need in us, which would make it little more than a form of self love, neither is it based on the loveliness of the beloved. It may be, after all, that we are called to love many people that ordinarily we would sooner shun than welcome as brothers and sisters. But love we must, impartially and bountifully. We are to love one another as we have been loved.

The second thing we realise about love from Jesus’ words to his disciples, is that his love for them is special kind of love. Not the love of a master to a favoured slave, but the love of a friend, of an equal. To be sure, this isn’t chummy friendship, or a facebook friendship, plentiful but often meaningless. We’re to obey his commands, and that isn’t something that I generally expect of my friends, at least, not those who I expect to hang onto! But it is still a friendship of equals. It is a friendship which sees the perfect love and goodness of the one who makes us his friends, and would no sooner disobey his loving commands than desert him as a friend. After all, Jesus too obeys his Father, and we don’t believe that this makes him the  Father’s subordinate. A great spiritual writer from the twelfth century, Richard of St Victor, when writing of the love between the persons of the Holy Trinity, tells us that the love of the Trinity must be a love between equals, because true love can never exist between a superior and subordinate. There would always be fear in the relationship, which we are told perfect love casts out. But how then, could God ever truly love us, if you can only ever truly love an equal? If ever there were an equality gap, it’s that between God and his creatures. A great philosopher once told a story which might help: There was a king who fell in love with a peasant girl. He loved her so much that he longed to be her husband and yet this seemed impossible to him. If he were to marry her and take her into his palace, the likelihood would be that she would feel unworthy or out of place by his side. Or that she might feel compelled out of fear of the king to love him. That she might always be aware of the one thing the king longed to forget, that he was a king and she a mere peasant, and that consequently she would forever remain unhappy. And since the king’s greatest desire was for the happiness of his beloved he couldn’t countenance causing her such pain. To elevate her by simply bringing her to his palace would have rendered her less happy than she would have been had she remained in obscurity, loved by an equal. The situation seemed impossible to him. How could he fulfil his desire to have this woman as his wife and, in so doing, to make her truly happy? The only solution of course, was for the king to put on the cloak of the beggar and go to the maiden and to woo her as an equal, in whose love she could be content.

God does not merely clothe himself in flesh as a deceit, to fool us into understanding him as our true friend, but becomes flesh and thereby make us his equals. The philosopher states that,


“…this is the unfathomable nature of love… [that it] desires equality with the beloved, not in jest, but in earnest and truth. And it is the omnipotence of the love which is so resolved that it is able to accomplish its purpose”  (Kierkegaard, Philosophical Fragments, 25)

That is the mystery at the heart of the Christian faith. God shows his love for us both in humbling himself and in raising us. He makes creatures his equals out of love for his creatures. What might it look like to live as people who are God’s friends?

I have two thoughts with which I conclude. First, to my clergy colleagues. If true love can only be shared between equals, between friends, can we ever truly love the congregation in which we minister if we see ourselves as the superior of the congregation? Can we love people who we might regard as our subordinates whose only task is to follow us? Jesus radically subverted these religious power games. He warned of those who “love to have the place of honour at banquets and the best seats in the synagogues, and to be greeted with respect in the market-places”. “But you”, Jesus says, “you are not to be called rabbi, for you have one teacher, and you are all brothers and sisters. And call no one your father on earth, for you have one Father—the one in heaven. Nor are you to be called teachers, for you have one teacher, the Messiah” (Mat. 23. 6–10). The temptation to be the superior of a religious community is always there. But God shows his love for his people in calling them friends, not servants. Are we, then, to make servants of his friends?

The second thought is for everyone here, clergy and laity. We are, I take it, people who are concerned with ecumenism, with building bridges of love, commitment and co-operation between different congregations of the Church. But we have to ask ourselves whether we can even begin to start to love one another as God loves us if we entertain the thought that our church might be superior to the church down the road, the church of our brother or sister. As an Anglican, preaching in a United Reformed Church, I am painfully aware of the historic hurts which led, not only to our initial separation, but then to centuries of Anglican superciliousness towards their non-conformist brothers and sisters.  I can only be sorry for this history, and hope that today we can avoid the same attitudes which betray that we just haven’t understood how radical God’s love, his declaration of friendship, really is! But alas, these attitudes are not confined to history. They are very present, and if you hang around in church circles long enough you are sure to hear them. It could be an Anglican belittling the non-Episcopal ministry of a Presbyterian or Methodist minister. It could be an evangelical feeling superior to a liberal because they don’t have the ‘true gospel’. Or it could be a liberal feeling superior to an evangelical, thinking that they are just a bunch of deluded fundamentalists who have noisy worship. And that is to say nothing of Anglo-Catholics! I see my own part in this ecclesiastical snobbery: Disdainfully looking at another congregation, looking down my nose at them because they get something ‘wrong’. Again, these are God’s friends, should they not be mine too? And if my friends, then they are surely my equals, and I should respectfully learn from them.

God the Son, who exists from all eternity, from whom all things come, for whom all things exist, who is worshipped by angels, calls us his friends. What might the church look like if we were to really start believing that!
Posted by Barnaby Perkins at 8:34 pm