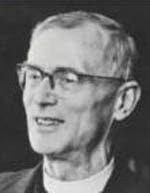 For those who have reached (or are about to reach) the end of term, I thought you might appreciate this, from Austin Farrer.

We notice that late in the summer term noises and confused cries, for which no reasonable cause can be assigned, are apt to trouble the midnight air. A friend of mine who lives in a College off Radcliffe Square lay awake against his will, hearing without much pleasure 'the shout of them that triumph, the song of them that feast'. Before he made another attempt at composing himself to sleep, he thought he would refresh himself with a taste of the coolness outside; he dressed, and walked into the square. The sound of riot had suddenly stopped; it was quite dark, and perfectly still; and a pair of nightingales in Exeter College garden were singing their hearts out. His own heart turned over in his breast. the performance, indeed was not new; we have heard nightingales before; and nightingales have been singing the same song since long before mankind got the wit to enjoy them. Yet thought there is nothing fresh for them to sing, they sing freshly, their singing is their life, they are not putting on a stale record. And it is a stale ear in my human head that cannot feel the freshness, or yield to the magic of it.

'Sing unto the Lord a new song',  says the old Psalmist, for God's most strange love is insulted by a stale adoration. And yet the newness will not be in the song, since there is nothing new to sing; but in the singers, to whom God may perpetually grant a newness of heart, in voicing his praise. Our tired imaginations see eternal sameness in the chanting of heavenly spirits; and yet, says St John, they sing a new song in honour of a wonder that will never grow old. For as God in the cradle is a wonder on earth, which angels celebrate, and shepherds adore; so man on the celestial throne is a marvel in heaven, which those heavenly eyes can never cease to drink in with amazement.

Salvation is all or nothing. God's other works are subject to his hand; his human creatures, to whom he has given a particle of his own spirit, he saves by uniting with his own everlastingness. There is no comfortable half-way house for us to abide in, midway suspended between God and the created world. It is the mercy of God to make us sharers in his own sovereign life, and this he does by uniquely and personally uniting the manhood of Jesus to his own being, and then associating us with that manhood of Christ. The heart and focus of humanity is there with God; and when we lift up our hearts, and put them with the Lord, we recollect what we are, and where we truly belong. Kings have always been credited, whether superstitiously or in mere ceremony, with a shadow of godhead. The substance is Christ's alone: his is the royal will by which we can live, for it is one with the will that made us; his purpose is the purpose of our being. The wonder of it never stales.

And so it is always a new song in heaven, with which we on earth can join, that the Lamb was slain, and has redeemed us to God by his blood out of every kindred and tongue, every people and nation, and made us unto our God kings and priests, by our association with that royal right, and with that redeeming sacrifice.