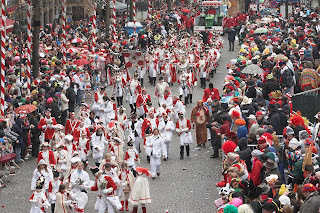 Five years ago I lived in Italy for a little while. In February 2009 I took a trip to Venice during Carnivale. Now, I have to admit, I find the whole mask wearing thing a bit creepy. Every time I went out, there were people wearing strange outfits and bizarre masks. It’s amazing how unnerving it is not to be able to see the faces of the people around you. Carnivale was a big party. The whole city was involved, and it all got me thinking about the meaning of the word Carnivale.

The word ‘carnivale’ was probably formed from the words ‘carne’ – meat, and ‘levare’ – to remove. Some think that the word may have different origins, but, seeing as carnivale always marks the approch of lent, the sentiment of preparing for a time of fasting by ‘removing the meat’ seems fitting. The climax of Carnivale is, of course, Mardi Gras, which simply means, ‘Fat Tuesday’. Having ‘lavared’ your ‘carne’, now, on the last day before lent, you make sure you use up any fat you have in your house in preparation for the start of the lenten fast on Ash Wednesday. Of course, in Italy and other Catholic countries, the word has now become synonymous with a great big party.

In Britain, we have nothing quite as extravagant or joyful as ‘Mardi Gras’. We have Shrove Tuesday, whose chief enjoyments consist in running around, flipping pancakes, and maybe dousing one with lemon and sugar before eating it. It all seems pretty dour, but I quite like it that way. To be honest, I think I would prefer a damp pancake to a street party. But then again, I think I would prefer almost anything to a street party! I'm not sure my time in Italy changed my British penchant for gloom. It is just possible that this delight in the dismal, goes way back into the history of the collective British psyche. Take the word ‘shrove’. It comes from the old English word ‘to shrive’ which means ‘to confess your sins to a priest’. On the continent, the day before the start of lent is marked by the last party before a time of slightly fewer parties (and a fair bit of sorrow for all the overindulgence). In Britain, we like to get on with our repentance early!

It is good to keep Lent seriously. We all know we are not as good as we might be, even if we don’t like to admit it. Lent is a time to be honest with ourselves and God, and to focus on the aspects of our lives in which we would like to bear a greater resemblance to Jesus. It is good to have a time of self denial, where we focus on those who have nothing, and remember how fortunate we are. But it is also useful to remind ourselves that, whilst abstinence can be good, it is not the only story God wants us to hear. It is ok to be shriven on Shrove Tuesday, so long as we remember that (by and large) the things we enjoy are enjoyable because God made the world good. So this Lent, may our abstinence lead us into a greater enjoyment of God’s good creation.
Posted by Barnaby Perkins at 4:45 pm