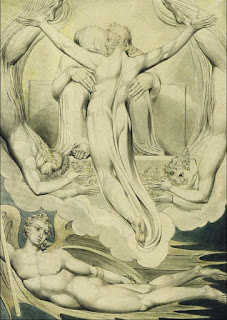 
"Paul sets over against [the self assertion of the Philippians] the fact that Christ does not make any such 'noli me tangere' out of his equality with God. He has no need to, because he is sure of his being equal with God. It is for that ver reason that he can also empty himself of the 'form of God', as it is presently put. 'He was in the form of God.' The expression therefore does not denote the same as 'equality with God'. En morphe theou hyparchein means to be God in outward appearance, immediately and directly knowable as such. Christ is God like that. Nothing prevents his being so only like that, mutatis mutandis like the people of Philippi who certainly not only are what they are but would also like to be seen for what they are, each in his own right, with his own point of view, with his own value which, in order to be value, of course seeks also outward credit.

But now, says Paul, Christ does not regard his equality with God in such a way as to cling to the form of God, or be bound to it. He is so much God's equal that he does not by any means have to make of his equality with God a thing to be asserted tooth and nail—not because he could also give it up, but because his possession of it (in contrast to the best that they can possess) is beyond dispute. When we are absolutely sure of a thing, we have no need to lay hold on it in the robber-like fashion described. To the extent to which two lovers, for example, really belong to each other, they can also give themselves freely, without fear of loosing themselves. So too the Son of God certainly does not give away his equality with God, does not give it up, but he does let go of it. From now on he is equal with God in the obscurity of the form of a servant. He is in humility the highest. The robber-like bearing, the half-anxious, half-greedy graspingness, the assertiveness and vanity of those in Philippi betrays the uncertainty of their possession. Christ, being equal with God, has no need to assert himself in that or to cling to it, but can renounce the outward appearance and credit that correspond to such being, without surrendering the being itself—indeed, in order precisely thereby (vv. 9 ff.) to bring it into credit."