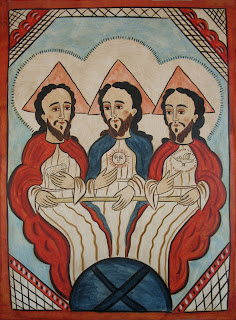 Trinity Sunday, with a little help from Richard of St Victor...

Trinity Sunday. Many preachers are scared of it, I’m sure mainly because we spend so little time talking about God the rest of the year, as opposed to what we ought to do for God or what God has done for us. But this is one Sunday on which a preacher can’t avoid talking about God without looking silly! Most congregations dread the yearly dose of peculiar maths and tortured logic (unless they get a particular kick out of watching preachers squirm). Personally, I relish it. I relish it because, despite the strangeness of the idea, despite the headache it can sometimes bring on, I need to think about who God is, and not just about what God does or how I can serve God. So who is God? God is one sovereign, all-powerful, all-knowing, transcendent,  gracious, merciful divine nature existing wholly and without remainder in three divine persons. Now that is a mind-bender.

The important thing to remember though, is that the Trinity isn’t a maths problem which can be solved by considering shamrocks or eggs or H2O. Neither is the Trinity a way of describing the different things God does, which is why substituting ‘Father, Son and Holy Spirit’ for ‘Creator, Redeemer and Sanctifier’ is not really all that helpful. After all, is the Son not also the creator and the sanctifier of his people? What about the Spirit? Veni Creator Spiritus? Does the Father not also redeem and sanctify? The ways we often think about the Trinity are generally not that helpful after all. So should we just give up, or is there a better way of understanding what we mean when we say that God is ‘Father, Son and Holy Spirit’?

Hold in your mind for a moment the belief that ‘God is love’. That’s an uncontroversial starting point. Generally, if we believe in God at all, we believe that the most significant thing we can say about God is that God is love. In fact, some of you might be thinking that we would be better off if we just left it at that! But what is love? I suppose a very basic definition is that love is the deep affection one person has for another. Love gives itself to the beloved. We might say that a particularly vain person ‘loves themselves’, but I don’t think we would see that as a positive trait. So ‘God is love’, must mean that God is the most supremely loving being, which in turn means that God must love another.

Now here comes the tougher bit. Imagine the time before the universe existed. Before the Big Bang 13.7 Billion years ago, before the rapid expansion in which electrons were formed, before gas began to condense into nebulae and stars, before suns exploded and formed planets, long before life ever evolved. Before we ever existed for God to love us. Imagine, if you can, the time before time itself existed, the moment where all there is, is God, the God who we call love. How can God be love if, in that moment before anything else exists, God is all alone, with no one else to love? If we really think that the greatest thing we can say about God is that God is love, then there must be another: a lover and a beloved. You must have at least two in a relationship of self-giving love.

Now that’s pretty cool. God is love, so there must be plurality in God! But wait a minute, you’ve said that there must be a lover and a beloved. That makes two. But this is Trinity Sunday? What about the third? What about the Holy Spirit? Think about the best human relationships you have ever seen, think of a family, for instance, which is truly beautiful, whose door is always open, whose table always has a spare seat for a guest. Think of the Weasley family from Harry Potter; a family in which the love between its members expresses itself in love for other people, and isn't diminished by that sharing, but is beautified even more. A family which has such strong love that it overflows and gives love and life to others. I'm sure we've all met families like that. The love can't just be contained among its members. If that’s true for human beings, how much more so for God, in whom we see supremely perfect love. The Father loves the Son and the Son loves the Father and together, from the perfection of their love, love goes out to a third, the Holy Spirit.

So when we think about the Holy Tinity, we are not thinking about a maths problem. We are thinking about a set of relationships. The Father is the source of divine life, the Son is begotten and beloved by the Father, the Spirit is the eternal object of their mutual love. One God, a community of perfect love. The truth is that as Christians, we don’t just worship ‘God’. We worship this relationship of eternal love which the Father, the Son and the Spirit have. And just like the beautiful family we thought about a moment ago, that eternal community of love draws us into its love, bids us sit at its table, offers its life to us. Why not just one God, all alone? Because only this community of love can draw us into God's own life.
Posted by Barnaby Perkins at 8:36 pm