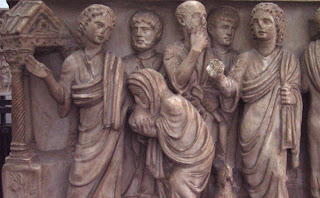 Why did the Hebrew people have a Sabbath Day? The answer most people give comes from the book of Exodus, where we read,

“Remember the Sabbath day by keeping it holy… For in six days the Lord made the heavens and the earth, the sea, and all that is in them, but he rested on the seventh day.” (Exodus 20.8,11)

Woven into the fabric of the universe, there is a pattern of work and rest, and God’s people are mandated to observe that pattern too. Just as God created the universe for six days, so we should have six days of work and then the seventh day, where we cease from all creativity, where we offer our worship to God. And so if we think about the Sabbath as a reminder of the necessity to cease from activity, then the way we keep it will emphasise rest. We will keep it in the way they do on the Isle of Lewis. I had a friend who spent a summer holiday on Lewis in the Outer Hebrides, and the people he was staying with were members of the Free Church of Scotland. On Sunday morning, they would go to Kirk in the morning, have something to eat when they got home, and then go to bed. My friend walked around Stornoway that afternoon, and told me of the profound lack of activity, and the drawn curtains of the houses of the pious islanders.

The way we talk about Sabbath, emphasizing the cessation of activity, generally reinforces this ‘six days the Lord created, on the seventh day he rested’ paradigm. But we often forget that the Old Testament gives another reason for the Sabbath in the book of Deuteronomy,

“Observe the Sabbath day by keeping it holy, as the Lord your God has commanded you…  Remember that you were slaves in Egypt and that the Lord your God brought you out of there with a mighty hand and an outstretched arm.” (Deut. 5.12,15)

You all know the story which provides the background to this command: Israel had been in Egypt for hundreds of years. As time went on, the Israelites were made the slaves of the Egyptians. They were forced into back breaking labour making bricks, day after day, with no future, with no hope of rest, with no time even to worship God. Every day, the Hebrew slaves were told that the only worth they had was found in how many bricks they produced. In desperate exhaustion, they cried to God, and God heard them and freed them and gave them the gift of rest. The message of the Sabbath day was much more than, ‘six days the Lord created, on the seventh day he rested take care of yourself and have a day off’, it was a message from God which said ‘No human being can ever claim to own you, you are no longer a slave, you don’t have to work for a master who always asks for more.’ Sabbath was given because God hates oppression. Sabbath was a gift from God which proclaimed that his people were free.

Now, I think that when the Synagogue leader in the gospel reading thought about the Sabbath, he had the Stornoway Sabbath in mind. Angry at Jesus’ healing on the Sabbath, he says ‘There are six days on which work ought to be done; come on those days and be cured, and not on the Sabbath day’ (v. 14).

But Jesus thinks differently. Here is a woman with a condition which leaves her unable to raise her head or to look at the people who are speaking to her. Eighteen years she has been bound, physically bowed down. As a woman she was already a second class citizen. Suffering from her disability she would probably have been ostracised from  her community. Doubly untouchable. She was weighed down to the ground with the condition she had suffered for such a long time, practically invisible to those she lived with. And Jesus saw her. I think that offers hope to any number of us who feel small, bowed down, who feel invisible. Jesus is the one who notices those who everyone else ignores. He sees us more clearly than we see ourselves.

Jesus sees this invisible woman and set her free. The Synagogue leader could only see the restriction of ‘you’ve got six days in which to do work’. Jesus realised that what the Sabbath is really about is liberation from slavery. In the case of this woman the slavery to the condition which has bound her many years. Couldn’t the healing of the woman wait for another, more appropriate day? No. There is no more appropriate day than the Sabbath on which to liberate a child of Abraham than the Sabbath day, the day that proclaims God’s hatred of oppression, whether oppression by disease, or oppression by religious leaders and traditions which tie up heavy burdens to weigh people down to the ground.

To reinforce his point, Jesus reminds the synagogue leader of his own Sabbath behaviour: On the Sabbath he unburdens his livestock to lead them to water – if a beasts who have been bound only a short time can be liberated on the Sabbath, how much more a daughter of Abraham who has been bound for eighteen years.


The Sabbath is about liberty. Later in this service when we give thanks to God for his goodness and for his liberating power revealed to us in Jesus Christ, we will pray these words ‘This day the risen Lord walks with your gathered people, unfolds for us your word, and makes himself known in the breaking of the bread. And though the night will overtake this day you summon us to live in endless light, the never-ceasing sabbath of the Lord.’ We look for the dawning of a Sabbath that will never end, and so as we wait for that day our task is to make every day a Sabbath, an opportunity to proclaim the liberty of God’s kingdom. What traditions and practices and behaviours do we as a church have which bind people and make them an invisible underclass? How can we liberate those who have been oppressed by the communities which are supposed to proclaim the liberty of the children of God? May we be people who live and proclaim with integrity the liberty of God’s kingdom.
Posted by Barnaby Perkins at 9:29 pm