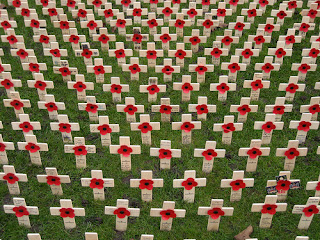 I'll admit my bias: I've never been a fan of the use of white poppies on Remembrance Sunday. For staters, the work of the Royal British Legion is something I am happy to support, and I would imagine anyone, even the most ardent pacifist would feel the same. The British Legion don't buy guns or tanks or bombs. They don't promote or campaign for war. They support victims of war, victims who have worn a uniform and fought, but victims none the less. They support the families of service personnel. They offer help and care for vulnerable people. That is why I am proud to buy and wear a red poppy every year.

White poppies on Remembrance Sunday on the other hand have always struck me as a rather self-righteous and somewhat cynical bourgeoisie statement of moral superiority. As far as I can work out from the website of the Peace Pledge Union who organise the distribution of white poppies, the money you spend on your statement poppy does not help the victims of war. The money you spend on your poppy is used politically. It is used to promote the pacifist agenda. "A noble cause",  you may say, and it certainly is, but I would contend that care for the welfare of actual human beings trumps any ideological commitment, however noble. So if you want to support the PPU, then wear their poppy next to a poppy appeal poppy, but don't substitute red for white, unless you care more about politics than people.

However, my dislike of the white poppy statement turned into righteous indignation this evening when I saw this on the PPU's website: 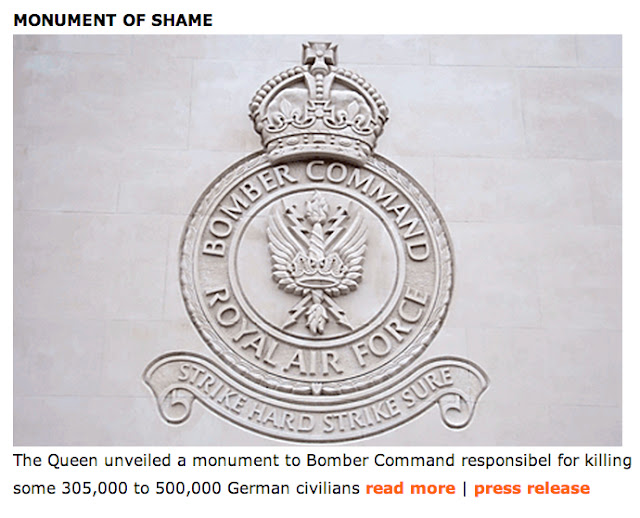 The historical naïveté of this an attack on Bomber Command is incredible. But I don't really want to get into a discussion over the ethics of aerial bombardment. What I find more incredible is that the message of peace clearly doesn't translate in the PPU's rhetoric. Physical war originates in hatred, anger and violent attitudes. Perhaps the PPU could find a more effective way of promoting peace.
Posted by Barnaby Perkins at 8:28 pm

Each year Remembrance Day leaves me worried. It does seem to have become not Remembrance so much as a "festival of national religion" [ as one of my one-time school-fellows described it]. The [worthy] support of the British Legion [ incidentally, singular?] subsumed in a glorification of war. And, yes, the bombing of the German cities might have been necessary to conclude matters, before even worse happened, but would Christ have seen it that way? I don't know, nor pretend to know, but, as Pr Barnaby discerns, some out there apparently do know with some certainty. Those who remember Acts 11 might well wonder at this.
Meanwhile there are wounded out there - wounded for what they thought was a good cause, or because they had no choice, and they are owed support.

Hello,
I would love to know who you are. Good blog etiquette, and all that. I have never been to a Remembrance Sunday service which glorifies war. I admit, this is my personal feeling. But the fact that we have experienced the day differently tells me that there is ambiguity in it, and the possibility remembering the departed, thanking God for the courage of those who were willing to fight against oppression, and also a commitment to peace. I don't think this is best achieved by protesting the existence of British Legion, however. They do good work, they support the vulnerable and do not promote war. I think that is my real objection to the white poppy. It seems like a gesture of protest, not against war, but against the existence of the British Legion. All very tawdry. Whether Jesus would have supported the aerial bombardment of Berlin or not, I likewise do not know. But I am quite sure that he would have ministered to a paralysed soldier as much as a paralysed civilian.