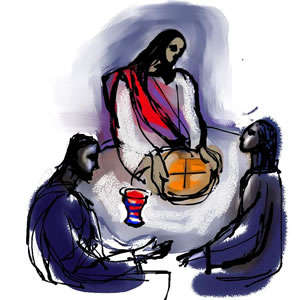 About a month ago, Caroline and I went on holiday to Sorrento. We had a wonderful time and, rather predictably, we spent much our holiday working our way around Roman archaeological sites. We did the obvious trips to Pompei and Herculaneum, and spent hours wandering around their streets. But we also went to some less well known places: the Villa di Poppaea in Oplontis, rumoured to have been the house of Nero’s infamous second wife, Poppaea Sabina. We went to a large farmhouse in the middle of a housing estate in Boscoreal, and we went to two beautiful villas in Stabia, which were a lot further away from the train station than the guide book had led us to believe! As we wandered round the remarkably preserved ruins of homes, destroyed when Vesuvius erupted in 79AD, you could almost feel what life would have been like to live in a Roman villa in the first century.


Now why on earth am I telling you about my holiday this year? I’m telling you because it is to these domestic settings that we are transported when we read Paul’s account of how the Corinthian church celebrated the Eucharist. It’s important to remember that in the very earliest days of the church, there were no church buildings in which people worshipped. All christians would have worshipped in the private homes of the wealthier members of the church. Another thing to remember is that, whilst we are used to receiving the eucharist as a tiny amount of bread (which looks and tastes nothing like bread) and a tiny sip of wine, in the first century the eucharist would have taken place within a dinner party. It would have been a complete meal.

Now when you remember these two things, the domestic setting and the dinner party, it becomes easier to understand why Paul was so unhappy with what was happening in the eucharist at the Corinthian Churches. The homes of the wealthy Corinthian christians would have had a dining room called a triclinium in which about nine to twelve people could have comfortably reclined around a table. It seems the wealthy Corinthian christians were inviting their well-off friends to sit and eat with them in the triclinium, where they were eating lots of sumptuous food and drinking lots of wine. But the poorer people, who weren’t as popular with the wealthy, were being left to eat in the atrium, a large entrance lobby which could seat about thirty to forty people. The rich were gorging themselves, while the poor were getting a few scraps of food and drink, scarcely enough to stave off their hunger. Imagine something a bit like the divide between first and second class on a transatlantic flight. In one: champagne, smoked salmon and other delicacies, something resmbling a bed rather than a chair, and a foot massage (you can tell I’ve never travelled first class). In the other, a soggy sandwich and a warm glass of orange juice and three inches of leg room, if you’re lucky. The poor Christians were being treated as the scum of the earth, as second class, by people who were supposed to be their brothers and sisters.

Paul’s problem with the Corinthian eucharist wasn’t that they weren’t getting the ritual or the liturgy right, or that they didn’t believe in the ‘real presence’. Yes, Paul does say that ‘all who eat and drink without discerning the body, eat and drink judgement on themselves’ (v. 29), but this cannot mean ‘perceiving the real presence of Jesus in the bread and wine’, that would run against everything Paul has been saying to this point. He’s been talking about how christians treat each other, not about eucharistic theology. For Paul, discerning the body means recognising the church as the body of christ (as he often calls it, cf. 1Cor. 10.16–17, 12.12–31). His problem was that by humiliating the poorer members of the community, the richer members had both failed to understand what the eucharist was really all about, and had desecrated Christ’s body, the church. All the liturgy and ritual, and reverencing the real presence in the world can’t make up for this basic failure!

So what is the eucharist all about? Paul reminds them by retelling the story of the Last supper, so that they could see through the current situation back to foundation of the eucharist, to the Lord of the Supper himself. Paul reminds them of the magnitude of the gift which Jesus gives: a new covenant, a new community, created at the greatest cost by Christ’s death for us. The old order was one in which people were divided, where the walls separating one group from another stood firm and high. But in the community of the new covenant, the walls have been torn down, ‘Jews and gentiles, slaves and free’ (12.13) are all part of the same body. So sharing the common meal is for Paul a kind of acted parable, declaring the unity and equality of all the members Christ’s body, the church. ‘Although we are many’, he says earlier in 1 Corinthians ‘we are one body, because we all share one bread’ (1Cor. 10.17). Just as baptism makes us part of the one body of Christ, the eucharist sustains us in the unity of that one body.

So, as we finish, what can we learn from the problems Paul addresses here? We don’t celebrate the Lord’s Supper like this any more, in someone’s home at a dinner party, and it doesn’t feel like there are class ranks in this church. So can we learn anything? Well, it would be a terrible sermon if we couldn’t, so I’m going to say, ‘yes we can’.

If the eucharist is about sustaining the unity of the body of Christ – unity with Jesus, the churches head, and unity between us, the members of the body –  if the eucharist broadcasts to the world the radical equality of God’s new community, in which the barriers between human beings have been torn down, we should really make sure that we don’t start erecting those barriers again! Whatever background someone comes from, the church should be the place where all stand as equals in God’s family, united in the life of Christ which we share. Absolutely no one should be excluded. Perhaps the question we should ask ourselves regularly is this: ‘who are the people we would rather didn’t come to our eucharist? Who are the people we would like to keep away?’ The noisy? The smelly? The ignorant? The bigoted? The liberals? The Trendies? The ‘happy-clappies’? The ‘moldy oldies’? Do we only want a church where we find ‘people like us’? Or do we want one that welcomes everyone who God is calling? The new covenant was established by the infinitely wealthy one, pouring out his own life for his lowly, grubby, ignorant, bigoted, loudmouthed, unpleasant, dearly beloved friends. If that is what we’re really remembering in the eucharist, what should our church look like? If the all-holy one invites us to his table, who are we to exclude people from ours?
Posted by Barnaby Perkins at 9:00 pm

Your local Roman church sailed a banner last Easter. 'Share Easter with us', it said.
I did wonder what the reaction would have been had I tried.