Revelation 3.1-6: Hear What what the Spirit says to the church 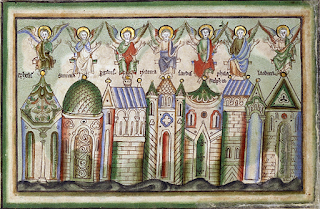 A sermon preached at Exeter College, Oxford 6 May 2012.


“At Helms Gate, before the mouth of the Deep, there was a heel of rock thrust outward by the
northern cliff. There upon it’s spur stood high walls of ancient stone, and within them was a lofty
tower. Men said that in far-off days of the glory of Gondor the sea kings had built here this fastness
with the hands of giants. The Hornburg it was called, for a trumpet sounded upon the tower echoed
in the Deep behind, as if armies long-forgotten were issuing to war from the caves beneath the hills.
A wall, too, the men of old had made from the Hornburg to the southern cliff, barring the entrance to
the gorge. Beneath it, by a wide culvert the Deeping-stream passed out.”

The Hornburg at Helm’s Deep was impregnable. Everyone knew it. Helm Hammerhand made the fastness famous, and according to Theoden, it would “never fall while men defended it”. There would be no safer place for the people of Rohan to face the onslought of Saruman’s Uruk Hai hordes. Theodan trusted the history of Helm’s Deep so much that he was oblivious to the culvert.

“Even as they spoke there came a blare of trumpets. Then there was a crash and a flash of flame and
smoke. The waters of the Deeping-stream poured out hissing and foaming: they were choked no
longer, a gaping hole was blasted in the wall, a host of dark shapes poured in. ‘The devilry of
Saruman!’ cried Aragorn. ‘They have crept in the culvert again, while we talked, and they have lit
the fire of Orthanc beneath our feet.”

The church of Sardis looked alive, it had a good reputation in the city, their religion was respectable, they faced no outward preassure like the other churches you read of in the second and third chapters of Revelation. We don’t read about any heresy. No specifics of immoral behaviour. No persecution, only good will and friendliness from their fellow Sardisians. To the casual observer, the church of Sardis was a picture of good health.

Throughout the history of the Christianity, theologians have tried to define what the essential observable characteristics of the true church are: Being in communion with a particular bishop; Apostolic Succession; The true preaching of the word, rightly administering the sacraments and the faithful exercise of discipline. All of these have been advanced as observable, objective indicators of being part of the ‘one, holy, catholic and apostolic church’. We play the same sort of games today. I’m sure you’ve heard people judge a church on the basis of its music, or whether they prophecy and speak in tongues. You may have heard people judge whether a minister is a ‘proper’ priest on the basis of the clothes she wears, which direction she faces when presiding at the eucharist or whether she holds her hands at the correct angle during the eucharistic prayer. I don’t doubt that all of these things are important, at least to some people. But when we consider the words of the risen Christ to the church of Sardis, we don’t find a criticism of the lack of reverence and order in worship, or a failure to use the charismatic gifts, or even a failure in doctrinal standards.

The church of Sardis had a reputation for being alive, but really only had the vestiges of living religion. There was a conflict between the impression they made and the spirit at their heart. The Sardisian church gives us the archetype of nominal christianity. Exterior correctness and respectability, but inside, the church was dying fast.

It is easy to see how The Church of England is particularly susceptible to the threat of nominal religion. We are the established church. We have a dignified, ancient and rich tradition of worship. Our theologians have a reputation for being subtle, nuanced and intellectually rigorous. Our bishops are part of the national legislature. The Church of England epitomizes respectability. If Professor Dawkins were to go to a Christmas Carol service at any church, I’m sure it would be CofE… probably an Oxford college Chapel. The Christianity of the establishment is particularly prone to death from respectability, to mistaking heritage and reputation for health, but is by no means unique in this. We aren’t the only church which has this culvert in the Deeping wall. Any church which prides itself on its spiritual inheritance or its present achievements  whilst simultaneously failing to pay attention to its inner life runs the same risk.

The nineteenth-century Danish priest and philosopher Søren Kierkegaard was well aware of this and wrote about it at length. You can read his thoughts in The Attack Upon Christendom. He looked at his own church, where the crowd and the congregation, the state and the church had become almost indistinguishable and was filled with rage. He felt that the only correct response was to attack ‘Christendom’ for what it had done to the church. It had robbed her of her vitality, of her inward life, of the sense of holy scandal that he felt the Christian gospel ought elicit from the world. “The human race”, he writes, “in the course of time has taken the liberty of softening and softening Christianity until at last we have contrived to make it exactly the opposite of what it is in the New Testament” (Fatherland  39). To some, Kierkegaard seemed to be anti-church, but he was only motivated by love for the church. He he wasn’t particularly interested in changing the specifics of church practice, rather, he wanted to change the spirit in which the church practiced its religion. All the observable features of the church were sound, but there was something missing, something lackluster about its practice of religion.

But there was still hope for Sardis. There were some for whom faith was still alive and not a matter of mere formality. Whilst something remained, there was hope that this something could be strengthened. Whilst there is still life there is time for the church to wake up, still time for it to repent. The letter to the Church of Sardis opens with a reminder of the Church’s true nature – it is like a light held in the had of Christ. The church is sustained by Jesus Christ, the living one, our life depends on him. Perhaps above all, the urgent need is to listen and discern. This is the advice given in each of the seven letters we read in the first part of the book of Revelation: “Let anyone who has an ear listen to what the Spirit is saying to the churches.” The church always must be a listening community, a community which deliberately listens for what the Spirit says, and deliberately places itself under the Lord’s training. The call the church receives in every generation is to reform, not so much by tinkering with the externals of church life, even though the externals will need reformation, but by recovering its inner vitality.

Posted by Barnaby Perkins at 7:16 pm