Let's not get too pompous about the (proposed) new baptism texts... 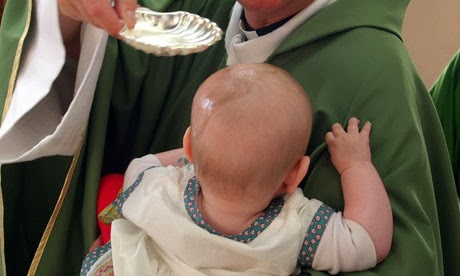 The brouhaha over the Liturgical Commission’s document “Christian Initiation: Additional Texts in Accessible Language” has intrigued me. First and foremost, I have been amazed at how many evangelicals (sorry to my many evangelical friends who haven't got involved with this) are now passionate supporters of the Common Worship project! When it comes to the Eucharist, the only liturgical fight is whether it is necessary to use it at all, it being so wordy and boring and all. But when it comes to baptism, the liturgical gloves are off. Suddenly the Church is full of ardent Cranmerian purists who loath any prospect of “dumbing down”. I find it interesting that some of those who have spoken against the proposed new texts seem not to appreciate that, if these were ever approved, they would be an additional provision, not a replacement. It would, I presume, be possible to keep a fairly traditional Common Worship format with one of the proposed prayers over the water in place of one of the existing ones? In essence, if this was formally accepted by Synod (I assume it is Synod that has to accept it?) it would merely enlarge the ‘Supplementary Texts’ section of the current Christian Initiation volume. So why get so worried?

I actually don’t mind the current baptism service all that much. While there are a few bits which are overly wordy and are uncharacteristically lacking classic Anglican economy of expression, but it does provide a theologically rich backbone to infant baptism. It is regretful that Common Worship has expunged baptismal regeneration from the Church of England’s liturgy —as far as I am aware, there is no modernised equivalent of the BCP’s “Seeing now, dearly beloved brethren, that this child is regenerate”— but it is still present enough in the liturgy to preserve this tradition within the Church of England.

Nevertheless, I do see the need for some additional texts. The current Common Worship prayers over the water are a good example of this need for addition. The prayers are, I think, too wordy and too theologically dense, and dare I say it, a touch pompous. I was pleased to see the two sensible additional suggestions, but would have liked to see more, picking up some (though not all) of the themes in the current prayers.

Looking through the sample service further down the document, I found it to be merely a lesson in how the current rubrics could be creatively and pastorally read. With the exception of the decision (I really don’t like the new offering) the prayer over the water, and the presentation (the existing rubrics for this are very confusing. Can it be omitted???) it doesn’t, as far as I can see, do anything that one couldn’t already do. The Commission is a good case in point. The new suggestions just make it clear that the unfortunately prosaic provision which Common Worship currently has needn’t be slavishly followed, but that ‘similar words’ may also be used.

All in all, the flap about ‘dumbing down' has, I feel, brought out an excessive amount of rather uncharitable pernicketiness, particularly when you consider that no one is proposing a wholesale change to the baptismal liturgy, which the introduction to the document makes quite clear. Yes, the suggested additional provision isn’t perfect, but neither is the current liturgy, neither is any liturgy for that matter. We should all just get over it.
Posted by Barnaby Perkins at 12:33 pm

I don't think it is as simple as that.
The difficulty is not for the clergy, who get to chose what they want to use, nor for the very occasional who still preserve enough of childhood memories simply to get their baby baptised, but for those who have cogent [Anglican] beliefs. I well remember the quoted response of the new Dean of Guildford in her former place to someone who wished to be wed according to BCP. 'Common Worship is what we do here' -full stop!. And. of course, wanting BCP is insufficient reason to override Rules and be married outside the parish.
So - - ?

ps I see you are troubled about anonymous comments. Its not all that easy to get past your robot catcher and the rest of the pfaff.