You have probably seen the Mulberry handbag advert. A young couple who have just moved into their new home sit in front of an open fire, surrounded by their yet to be unpacked belongings. The young man turns from his wife saying, "I know we weren't going to do presents, but here' ... he presents his wife with a box... 'Oh Joe', she pulls a bright red Mulberry handbag from the box which glows and illuminates her face with holy splendour. 'It's the most beautiful thing I ave ever seen'. There is a knock at the door and round the corner comes a farmer: 'evenin'' he says, 'I 'eard you 'ad a new bag.' hand he comes in and gazes at its resplendent beauty cradling it as though a small child. In comes another farmer with sheep in toe as angelic choirs sing in the background. Finally in come three friends, who had been stuck in traffic. Resplendent in paper crowns they bring gifts and kneel before the handbag, 'This is truly marvellous', says, one, 'It smells amazing', the second, while the third simply looks longingly at the bag and says 'it's a thing of wonder'. By this point Joe is looking a bit perplexed says... 'guys, its just a bag' and they all laugh, and settle back into admiring its beauty.

It's a bit of fun, and a very clever advert which reminds us of our tendency perhaps to make a little more of gift giving at Christmas than is entirely healthy! But there is something profound about gift giving. It is an act of love, of kindness, of selflessness. Generosity is in many ways one of the noblest qualities of humanity. A virtue we would all want to foster.

What is the greatest gift you can give this Christmas? Whether or not we have the means, we all have a tendency to measure the value of the gifts we give by their label or their price tag. A new pair of socks... thanks so much?!? A Mulberry Bayswater handbag! WOW!

But there is one commodity which we all chronically lack in twenty-first century Britain. It is something which you can't get more of by working harder, or networking better. An impressive stock portfolio won't give it to you, and it can't be found through getting to know the right people. The thing we all seem to lack these days is time. We tend to be frantically busy. Always trying to fit more into the finite span of our waking hours.

Perhaps the greatest gift we can give this Christmas is the gift of time. But not productive time. Idle time. Lazy time. Wasted time. Time in which nothing of any use is achieved.

A parishioner who I won't name once told me that he thought the definition of a Vicar was someone who didn't know the meaning of the phrase, 'a waste of time'. I am certain that this was a complement! It is a real challenge, something you have to work really hard at, to see no conversation, no encounter, no contact with people as a waste of time. And I think this is something which shouldn't just be the preserve of vicars.  We all need to learn to be idle with other people again.

Wasting time with people, people we love, certainly, but also wasting time with people we don't love yet. Wasting time with no hope of outcome or achievement. Simply being with others. This is the greatest gift we can give this Christmas, because it reflects the gift of gifts, given to the human race by God: that God being born as a human baby, as one of us, was a divine decision to waste time with us. To give himself to us in the knowledge that we could never give anything back that would add to God, or make God more happy, or content. God chose to give himself to us with no expectation of return.


So this Christmas, may we all find time to waste time, to waste time with each other, to wast time with God.
Posted by Barnaby Perkins at 10:54 am No comments: 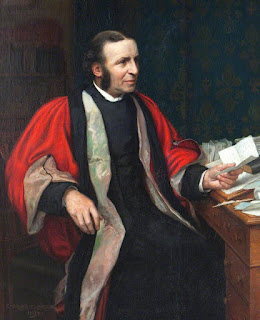 Here is a slightly reworked hymn by former Bishop of Durham, Handley Moule. Its original 77.77 metre made it sound a little sparse (perhaps better as a gradual hymn), and despite rich themes of service and dedication, a bit childish. With a bit of reworking it fits a L.M. tune quite well, and sounds much grander, particularly when sung to Orlando Gibbons' wonderful tune Song 34 (usually the tune for 'Forth in thy name, O Lord, I go" – I also missed out an odd verse about plying the scholars task (I think it started life as a school hymn).

Let me know what you think.

O Lord and Saviour, true and kind,
Be thou the Master of my mind;
O bless, and guide, and strengthen still
my humble pow’rs of thought and will.

Thou, Lord, hast made me mind and soul;
I for Thee choose to use the whole;
for thou hast died that I might live;
and all my pow’rs to Thee I give.

I, striving, thinking, learning, still,
O let me follow thus Thy will,
until my whole glad nature be
prepared for duty and for Thee.
Posted by Barnaby Perkins at 10:40 am No comments: 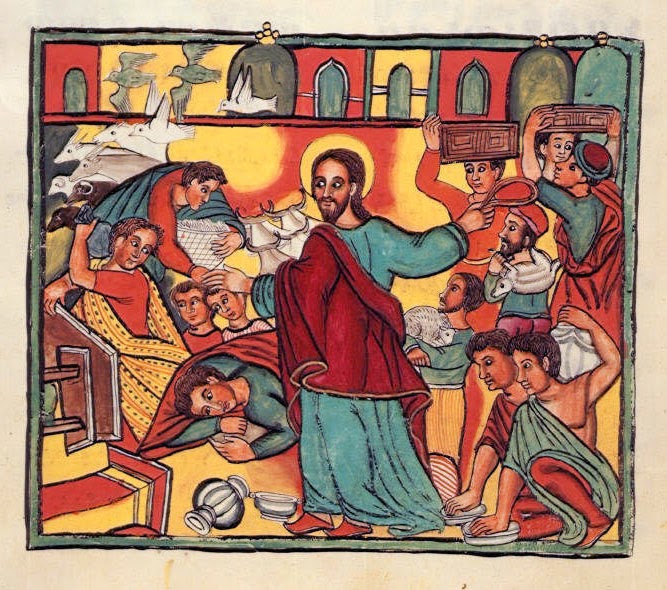 Many people find Jesus’ antics in the temple a little embarrassing; after all, isn’t Christianity supposed to be a religion which eschews violence? That disowns those lower instincts which cause us to take a whip and turn over tables and send things flying? When the person having a tantrum with a whip is the Son of God, well, that can be something we find hard to reconcile ourselves with. Perhaps it is because I have watched far to many movies where a tough guy with a thirst for justice beats up scores of people in his righteous anger, that far from being embarrassed, this is one of my favourite stories in the New Testament. Goodness alone knows what that says about any flaws in my personality!

And the story isn’t just fascinating because of its explosive drama. There are lots of details that make it especially interesting. I won’t go into when exactly the event took place, except to point out that Matthew, Mark and Luke have it taking place just before Jesus’ Crucifixion, but John has it right at the beginning of Jesus ministry, years before his death. Who is right? Nobody knows. But there is one very interesting comparison between the four versions of this event recorded in the four gospels. Matthew, Mark and Luke all hint that the money changers and animal sellers were up to no good. Maybe they were being exploitative. Perhaps they were fiddling the first century equivalent to the Libor rate. Whatever they were doing, Jesus condemned them as turing God’s house into a den of thieves. But John doesn’t. No mention of theft, or extortion or corruption. Simply that these people had turned God’s house into a marketplace.

Now, if we are very literalistic, we might be quite sympathetic with this. We wouldn’t like our church turned into a marketplace, would we? With animals, along with the many gifts the bring, being bought and money changed while we were trying to pray? Surely the temple was supposed to be a place of quiet contemplation, not this noisy, unpleasant, dare I say it, unholy place. But that is where we need to sharpen our understanding of the Jewish faith, and particularly the temple. Because the temple wasn’t serene and tranquil. It was a place of pilgrimage and sacrifice. It would have been noisy, bloody and hot. And the traders at the temple were carrying out a vital service. If you were going to make the pilgrimage to Jerusalem for the celebration of Passover, when you arrived at the temple you would need to provide an unblemished sacrificial animal. If you had walked hundreds of miles to Jerusalem, providing an animal without blemish would have been hard. Much easier to set out from your home without an animal, but with a purse, and purchase an acceptable animal once you arrived at Jerusalem. Hence the need for animal sellers at the temple.

And what about those money changers. I’ve never trusted Thomas Cook, surely their first century counterparts were up to no good. But their place in the temple was vital too. The Jewish law required a tax to be payed at the temple (Ex. 30.13). But what money would you use? Standard Roman coins had, to Jewish eyes, idolatrous inscriptions and images on them, proclaiming Cesar to be a God. You couldn’t bring money like that into the temple. So it was agreed that the only money acceptable within the temple was Tyrian silver, which didn’t have any idolatrous images or inscriptions. The merchants weren’t wicked, according to John, their presence was essential to the proper observation of Passover in the temple. Without them the temple as the place where people go to seek the presence of God would have ceased to exist.

And that is I think, exactly John’s point. Jesus was not judging the temple in Jerusalem as corrupt, but was declaring it to be obsolete. Jesus is not just pronouncing judgement on corrupt religion, but on organised religion altogether. I think that the difficulty all organised religion faces (and I say this conscious of my position), is that to an extent, it commodifies God. Pay your dues, come to this place, seek the advice of this holy man or holy woman and you will be able to have a relationship with the almighty, inner peace, forgiveness of sins, or whatever it is that we seek to get out of religion. Jesus stands resolutely against this. “My Father’s house”, the entire idea of being in the presence of and, in communion with God, should not be turned into a marketplace, it should not be turned into a product which we buy into. Partly this is because whenever we turn God into a product, we always ultimately turn God into an idol: we pick the bits of God which we find acceptable and therapeutic and comforting and buy into those. But the ultimate reason that turing God into a product is so reprehensible is that it fails to recognise the one place where God is truly present, in the person of Jesus Christ. That is why when the temple officials ask Jesus for a sign of his authority to clear out the temple, he says ‘destroy this temple, and I will raise it in three days’, speaking, as John reminds us, of the temple of his body, the place where God now dwells with his people, in their midst, walking among them. Jesus wasn’t the only person in the first century to speak against the temple. But he was the only person to claim that the temple as the place where God’s presence can be found had been replaced by him, the living presence of almighty God.

On Wednesday, The Archbishop of Canterbury launched a new series of “Lambeth Lectures” and gave inaugural lecture himself. He started his lecture with this statement:

In essence, Jesus’ cleansing of the temple teaches us to be very careful about our religion, even when we have the best motives, because to all of us, me included, the decoration matters a great deal. I love the church. I love the ritual and the hymns and the liturgy. But if any of those things become a religious product which I buy into, which draws my focus from worshiping the God revealed to us in Jesus Christ and following him with every ounce of my energy, then I have to ask myself: If Jesus came into church today, would he be appearing with a whip of cords?
Posted by Barnaby Perkins at 8:49 pm No comments: