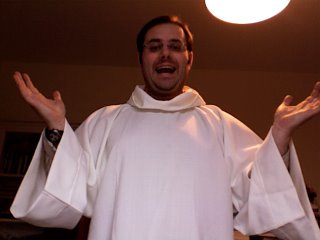 On April the 9th in 1756, a ship left Bunce Island, Sierra Leone. On board that ship, among 84 other captives was a 10-year-old African girl. Her ten-week journey took her across the great waters of the Atlantic Ocean to South Carolina, where she was renamed Priscilla and sold into slavery. Taken from her friends, family and culture, Priscilla lived a life of involuntary servitude, an exile in a foreign country. Priscilla however, stands out. In fact, she is a remarkable person. Of the 12 million Africans who were transported across the Atlantic between 1530 and 1880 Pricilla is one of the few who produced a paper trail, a trail which tells us of her life as a slave owned by Elias Ball II, a South Carolina rice plantation owner, her marriage to a man named Jeffrey and of her 10 children, at least four of whom reached adulthood. When Priscilla died in 1811, she had 30 grandchildren. Her descendents are still alive today, the living representatives of a girl taken into exile and captivity across the great waters of the Atlantic.

Both exile and water are central themes in the Old Testament reading. Unlike Priscilla’s story though, the waters spoken of here are not a corridor at whose end lies slavery, but liberty. In Isaiah 43 verses 16–17 the author reminds us of the water of the Exodus, the waters of the Red Sea, through which God made a path, parting the waters and making the land dry for the Israelites to cross over from slavery and death to liberty and life. At the same time as being a corridor of life for the Israelites, the waters became a snare in which the Egyptian oppressors were caught and were snuffed out. God had indeed been with his people as they passed through the waters of their trouble, and he would be with them again as he liberated them from their new slavery, this time not to the Egyptians but to the Babylonians. Crucially though, the Israelites were not to focus on what God had dome in the past. God was preparing to do something new; a new liberation, which would outstrip the salvation displayed in the Exodus. So, in beautiful poetry, the writer in verses 19–21 turns the imagery of the Exodus on its head: In the past God brought dryness to the bed of the sea to make a path for his people; now, he will bring water, and with it life, to the dryness of the desert. God will restore the life of his people, he will bring them out of exile, he will break down the bars that keep them under the oppressor’s power and bring them into such liberty as they could scarcely imagine. Even comparison with the greatest event in their history could not do it justice. In that day, the land that had become a barren wilderness would be anointed with the presence of God, new life and hope would spring up where once there had been only death and despair.

In the gospel, we find Mary engaging in what, to onlookers would have seemed a deeply wasteful and extravagant act. The annointing of Jesus feet with a large amount of expensive perfume. We hear that it was worth arounf 300 denarii. A labourer in Jesus’ day would have probably earned about a dinarius a day. Three hundred denarii would have been a whole year’s wages for a full-time labourer. The value of the perfume was enormous. Why would Mary waste money like this? This uneconomical anointing only really makes sense in the light of Passover, the festival in which the Jews remember the Exodus from Egypt, and the festival at which Jesus would, as St Luke puts it accomplish an Exodus of his own. The Exodus, which is in fact the true fulfilment of the passing through the Red Sea. Mary, in anointing the feet of Jesus is preparing him for his burial. Little wonder then, that immediately after this story is the event on which we reflect on Palm Sunday, where a corridor is opened for Jesus, not though the sea but into Jerusalem. A corridor strewn with palm branches hailing the coming king. A corridor which would lead however, not to a throne as we would understand it, but to the throne of the cross. And from that throne, the king of kings suffers the ultimate exile, he enters into the shadow-lands of separation from God. He experiences the full fury of the Roman oppressors, and in his own body opens up a new, living corridor, along which the life-giving river of water and blood which flowed from his side passes, bringing liberty to all.

So great was this liberty that St Paul, when he considered all the privilege that was his by birth, the great traditions of the Israelites which looked back upon God’s dealings with his people in the past, saw these ultimately as rubbish in comparison to knowing Christ in the power of the resurrection and the fellowship of his sufferings. St Paul did not want to look back to the former things because in Christ’s death and resurrection he found the place of true and ultimate liberty.

You might be wondering what this have to do with the slave trade, the subject on which Jeremy asked me to preach this morning. Isn’t the freedom Paul finds in Christ spiritual? Surely, the freedom Jesus offers us in the gospel is a freedom from the consequences of our sin, making us fit to be with God in heaven forever? Well, in the inimitable words of Vicky Pollard, ‘Yeah but No’. Of course the Christian message is one of hope for life after death, but it’s also a message of hope for life before death. The liberty which Christ has given us by his death and resurrection should impact the way we live our lives today. 200 years ago, another Exodus occurred when a group of Christians, inspired by the liberating love of Christ worked tirelessly for the abolition of the slave trade. But, as Isaiah said, we shouldn’t just look back at what God has done in the past, but look forward to what he will do. Today there are millions of people trafficked across international boundaries and sold into modern forms of slavery. As those who have experienced the great liberation brought by Jesus, we in turn have a duty to bring liberty to those suffering oppression.

In the prayer we sometimes use after communion, we say these words:

‘May we who share Christ’s body
live his risen life.
We who drink his cup bring life to others.
We whom the spirit lights, bring light to the world.’

As we come to eat and drink today, we are reminded that we are not only the recipients of life, but the bearers of life to others. As we remember the two hundredth anniversary of the abolition of the slave trade, may we resolve, as the bearers of Christ’s life to the world to join our voice, and our efforts with all those who wish to put an end to slavery wherever it is found.

Barny, great sermon. I'm very impressed by the way you have managed to draw all three readings together AND refer to the slave trade! A challenging practical message towards the end as well. Hope I get to hear you for real one of these days!

Barnaby, my dear brother! Greetings in Jesus Christ, from Malaysia. It's good to know that you have finally found your calling, no surprise as a minister! And in the Anglican tradition!

Keep up the good work! I think I shall be popping by from time to time ... I miss your fellowship, your insights, thoughts, etc.

Great to catch up with you.

Warmly,
Jason, who studied and lived in Aber, attended AP, and came back an Anglican after one year in London before quietly leaving the UK on dubious circumstances!