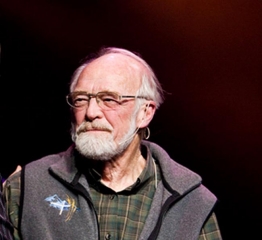 Some more great (and sometimes acerbic) thoughts on prayer from Eugene Peterson:

"John Calvin frequently referred to the world around us as a "theatre of God's glory." We write of the creator's dazzling performance in putting together the elements of matter and arranging the components of the cosmos. Everything is created. Everything carries within its form and texture  the signature of its creator.  No part of this material world is unconnected with God; every cell is in the organism of salvation. Biblical religion cannot be lived apart from matter - the seen, felt, tasted, smelled, and listened to creation... creation is our place for meeting God and conversing with him." (Peterson, Answering God, 71)

Disassociated from creation, prayer drifts into silly sentimentalism, or snobbish mysticism, or pious elitism. The intent of prayer is not to  to refine our course materiality into pure sprit so that we will not embarrass heaven with the vulgarities of flesh. We are not angels nor are we to become angels. The word did not become a good idea, or  a numinous feeling or a moral aspiration: the word became flesh." (72)

"Significantly, while the Psalmists called God a rock, they never set up a rock and called it God... An idol reduces and confines; a metaphor expands and connects." (77-78)

"There is a pseudo-prayer that promises its practitioners entrance into the subliminal harmonies of the of the way-things-are, putting them in tune with the general hum of the universe. This so called prayer reduces tension, lowers stress and extends longevity. The people who get good at it are calm, their voices soothing, their actions poised. They meditate on beautiful thoughts and sleep well. Psalm prayer  also enters into the-way-things-are, but finds that the-way-things-are is pretty bad. Evil is encountered. Wickedness is confronted. This prayer quickens the pulse and shoots adrenalin into the bloodstream. The people who practice this prayer get excited - they yell and gesture. They are engaged, or soon to be engaged, in an act of war. Prayer is combat." (96)

"There is hardly a page of the Psalms that isn't left smoking with a pungent curse." (101)


"Not every prayer is capped off with praise. In fact most prayers, if the Psalter is a true guide, are not. But prayer , a praying life, finally becomes praise. Prayer is always reaching upwards towards praise and will finally arrive there... The end of prayer, all prayer, is praise. Our lives fill out in goodness; earth and heaven meet in an extraordinary conjunction. Clashing cymbals announce the glory: Blessing. Amen. Hallelujah." (127-128)

And  finally for a little Karl Barth on praying for God's name to be hallowed:

""Hallowed be thy name" that means: may it  be given to us and to the world, to this world which is neither worse nor better than we are, in the midst of which we creatures have the advantage of knowing thee, of being called to thy service - may it be given to us to make use of thine incomparable offer; may it not be in vain  that thou hast spoken to us in thy Son; may thy church know how to put its existence to work; may it be liberated from... fear and faintheartedness, from the spirit of pride, from flippancy. May we stop leafing through the Bible instead of reading it. May we moderate a little out habit of of quoting the bible instead of living with it and letting it speak. May we pray that the Bible will not cease holding our attention. May the Bible not begin to make us yawn, and thy word, in all its parts, not become a boring matter in our minds and in our mouths; May it not become a bad sermon, a bad catechism, a bad theology." (Karl Barth, Prayer, 33-34)

Posted by Barnaby Perkins at 10:09 pm