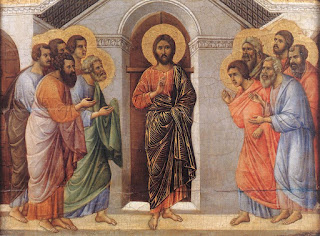 Try to think for a moment of all the things which might attract you to a Church. Good music? Friendliness? A particular style of worship? Interesting sermons?  Well, whatever you think makes a church an attractive proposition, I doubt any of you think ‘locked doors’, ‘panic’, ‘fear’. Surely any church which had those characteristics wouldn’t last long? But it’s to exactly this kind of church that Jesus comes in this morning’s gospel reading. We find a group of disciples locked in a room, terrified, perhaps thinking that they might stand accused of stealing Jesus’ body, perhaps fearing that they might very soon, quite literally have to follow their master in taking up their cross. This didn’t look like the kind of church that was going to set the world on fire.

But it’s into the midst of this frightened group that Jesus appears. The locked doors aren’t able to keep him out. And so there he is. How would the already terrified disciples feel? Perhaps they are a bit nervous about what Jesus would say to them. They’d already deserted Jesus when he was being tried and crucified. Now, even after Mary had told them that she had seen Jesus risen from the tomb, they aren’t rejoicing, but trembling. Into this trembling crowd Jesus doesn’t breath a word of condemnation, but says ‘peace be with you’. The peace Jesus speaks about here means much more than ‘don’t be afraid, don’t stress out’. Jesus pronounces the peace and forgiveness and the restoration of all things which God’s kingdom brings. The trembling church becomes the forgiven church. It also becomes the church which has its doubts addressed – Jesus shows them his wounds. And it also becomes the commissioned and gifted church – Jesus sends the church as the Father sent him and breathes the Holy Spirit into them so that the mission of God can be fulfilled. This church had absolutely nothing going for it, except that this was a church which Jesus had broken into and had chosen to be present with.


The church of locked doors – Maybe our doors aren’t physically shut and locked, but have we shut the doors in other ways? Are there ways in which we not only try to shut out a world which we feel is terrifying and hostile, but also, perhaps, try to shut out Jesus, who we feel ashamed of having let down? The church in the twenty-first century, including our congregation, looks in many ways a lot like the church of locked doors. What on earth has a church like this got going for it? Well, everything and nothing. Nothing, because, in truth, left to ourselves, we have very little to offer, and a huge task to do. Everything, because we are not left to ourselves. Perhaps the timid, cowering church is the closest thing to being a real church as we can ever get, because when we know how little we have to offer, we know that what we do offer genuinely comes from God.


There are lots of interesting things in this story, and lots of questions to ask. The real surprise for me, which I don’t think we often pick up on because we’re so obsessed with ‘Doubting Thomas’, is that the disciples only a week after Jesus had appeared to them, given them peace and pardon, breathed the Holy Spirit over them and commissioned them to take the good news to the word, are back in a locked room! And into this locked room Jesus comes again, and pronounces peace again, and addresses the disciples’ doubts again. When the disciples’ are afraid, Jesus grace increases. Jesus keeps returning to us, he keeps giving, that’s just the kind of God he is. There is nothing that we do which can ultimately shut him out.


But even though the doors we lock ourselves behind aren’t a barrier to Jesus coming to us, he doesn’t want us to stay locked up. He doesn’t even want us to just open the doors. He wants us to leave the building: “ As the Father has sent me, so I send you.” Jesus’ gift to us, his Spirit, is primarily given so that we can share the good news of Jesus with others. It’s impossible to talk about spirituality without talking about mission. This isn’t trendy modern CofE, here are some words from William Temple, one time Archbishop of Canterbury:

“We must not expect the gift while we ignore the purpose. A Church which ceases to be
missionary will not be, and cannot rightly expect to be “Spiritual”.”
(Temple, Readings in St John’s Gospel, 386)

To move beyond being the church of the locked doors, to be able to do any good in the world, the earliest Christians needed Jesus with them. Jesus was with them breaking down the doors they had shut themselves behind, beckoning them outside, letting them know that they were loved and forgiven and that God had big plans for them, helping them to realise that it was God’s work they were engaged in and not theirs. The same is true for every Christian in every generation.
Posted by Barnaby Perkins at 2:53 pm