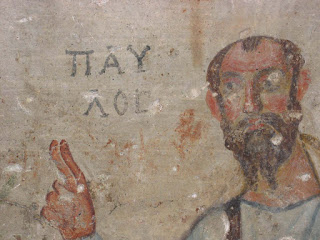 We have preaching a series on 1 Corinthians at St Nic's at the moment. Here is my offering on the first seventeen verses of chapter three.

As I was working on my Sermon, I realised that what we have in these readings from 1 Corinthians is a description of the real church. Not the church we fantasize about, not the church that we would like to see, but the church as it is, with all its messiness and fighting and trouble. What strikes me about the letter’s Paul wrote to the Corinthian church is that, despite all its problems, you could not deny that this church was alive. These Christians, as Paul says in our reading, are God’s temple, with his spirit living in them. Isn’t that strange, the most vibrant church in the New Testament, the church you could best describe as ‘alive’, is a church which is so full of problems. Perhaps this shouldn't surprise me, life isn’t smooth, and living things always face problems. You don’t, after all, get any trouble from the residents of a grave yard. Real, living Churches always face difficulties, it’s part of the growing pains of the children of God. And the church of Corinth was no stranger to this. We don’t see a perfect church in this letter, but we do see a real church, a church whose problems we are familiar with. And in this letter we also find an Apostle who, like a mother, wants to feed and nurture these young christians, to help them grow up into maturity in Jesus.

And so we come to this morning’s reading, which I think could be given the title, ‘Real Church: Real Spirituality’. Notice the first words of the reading, “And so, brothers and sisters, I could not speak to you as spiritual people, but rather as people of the flesh, as infants in Christ” (1 Corinthians 3.1). The Corinthian Christians were very proud of their Spirituality. In fact they were quite critical of Paul for not being spiritual enough (2 Corinthians 12)! They were quite convinced that they were the real deal when it came to matters of the Spirit and that everyone else was, well, the opposite,  fleshly. But Paul immediately turns their own elitist way of thinking about spirituality back on them. They think they are Spiritually mature, but in reality they are babies, so immature that they can scarcely be called spiritual. Paul wasn’t known for pulling his punches, but that is just down right insulting, isn’t it? How can Paul say that about the poor Corinthians? You might even start to feel sorry for them.

The answer is that Paul knows a secret about the spiritual life. He knows that true spirituality bears fruit: Love, joy, peace, patience, kindness, goodness, faithfulness, gentleness, self-control, he says in another of his letters (Galatians 5.22–23). But when he looks at the Corinthian church he sees the complete opposite. He sees jealousy and quarreling. They are Christians and of course every Christian has been given the gift of the Spirit by Christ. But the Corinthians were behaving as though they hadn’t received Christ’s gift. The fruit of their lives was telling a different story to the words that were coming from their mouths.

What makes matters more serious is that their ‘jealousy and quarreling’ wasn’t about trivial things. I get quite jealous of people who have the must have clergy gadget, the ipad, but this isn’t the kind of jealousy Paul has in mid. They weren’t jealous about each others cars or houses or jobs. In fact, it’s probably better to translate jealousy as ‘zeal’. The Corinthians were religiously zealous. They were keen on promoting their strongly held religious opinions, and it was this which caused their quarrels. They were quarreling over religion, and don’t we know the pain of that! There were factions in the congregation, and they each had their favourite religious teacher: Paul, Apollos, Peter, and then there were the really conceited ones who claimed to only have Christ as their teacher. And division into religious parties wasn’t just fanboyishness, they were asking really serious theological questions: How should we grasp God’s wisdom? How can we avoid worshipping idols? How should the Spirit be manifested in worship? These are important questions to ask… and these were the sorts of questions which were taring the Corinthian church apart. As long as their zeal for their favourite teacher or their theological hobbyhorse were causing quarreling and disunity, they were living as though they had never known the spirit, as though they had never become Christians.

So what does it mean for the church to be spiritual? According to Paul it means to live without rivalry and disunity and quarreling. Paul says that the way to have real spirituality, the way to be spiritually mature is to stop fighting. The real measure of spiritual maturity is seen in the unity and peace of the Christian community.

I don’t think it’s too hard to see spiritual elitism in our own lives. We might get ‘into’ a particular spiritual writer, I’m a fan of Eugene Peterson, but it could be John Main, or Richard Rohr, or Ignatius of Loyola or St Francis of Assissi or Thomas Aquinas or Junlian of Norwich or whoever. Perhaps we start to think that this person we find inspiring has all the answers and that nothing else quite hits the mark. Or I might have a particular way of praying which I think is really neat. So why should you bother with anything else? Right? After all anyone who doesn’t pray how I pray, or worship as I worship is really missing out! You’d have to be foolish to not want to do things differently! It might be that I think I am the one with the correct doctrine or that I am a proper catholic or whatever. But whatever standards we set up to prove that we are the real deal, the genuineness of my spirituality will be seen in one thing and one thing alone: do I live in love and peace with my brothers and sisters?

So how do we live in unity and peace in the church? The first thing Paul does is to remind us what we already are in God’s eyes. The church is God’s garden (3.5–9), God’s building (3.10–15) and God’s temple (3.16–17). The church is God’s prized possession. He couldn’t love the church (the real church, as it is with all its messiness) more. We don’t need to engage in spiritual one-upmanship or elitism, trying to prove that we are better than the rest, because God already loves us all just as we are.  The second thing he does is to remind us that the church belongs to God, and not to us. We are given tasks to do in the life of the church: we are to sow and to water; we are to put brick on brick. But ultimately, the garden, the building and the temple belong to God. ‘Paul planted, Apollos watered, but God gave the growth’ (3.6). How do we move beyond divisions in the church? By realising that we are all working to the same end. By realising that we are co-workers and that final responsibility for growth doesn’t lie with us, but with the God we serve.

Despite our differences of emphasis, despite the different ways feel God’s presence with us, despite the external differences of practice between this church and other churches, one thing can truly be said, we are all co-workers, planters and waterers of God’s Garden, brick layers in God’s building. True spiritual maturity isn’t evidenced by our rigorous spiritual practices, or by our detailed knowledge of spiritual writers. It isn’t found in our orthodoxy, or in the correctness of our particular form of worship. True spiritual maturity is found the church living at peace, it is found in serving God and serving one another.
Posted by Barnaby Perkins at 8:52 am