Freely you have received 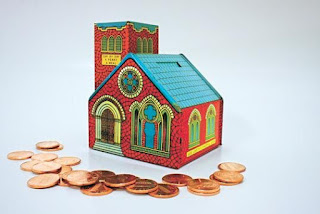 I opened my pay slip the other day, and out of the envelope fell a piece of paper informing me of the revised Church of England parochial fees. For those of you who aren't CofE clergy, parochial fees are the charges the church makes for certain special services, e.g. weddings, funerals and associated things like the reading of the banns of marriage.

I initially ignored the piece of paper (I ignore most pieces of paper which come my way), but my wife read it and pointed out some peculiarities. I decided to pay closer attention to the document, and as I did I flew into a holy rage. It felt all wrong to me. I am supposed to be a minister for all parishioners. I am housed and paid to free up my time so that I can, among other things, provide this kind of pastoral support to anyone who needs it, whether the are a member of the congregation or not, whether they can afford the fee or not!

Now I am not so naive as to imagine that there should be no charge associated with any service which the church provides. I understand, for example, that there is a legal administrative aspect to the solemnization of matrimony. Clergy have to maintain and store legal records etc. But surely, this should never be more than you would get charged by a registry office? The local registry office currently charges between £100 and £250 depending on the day of the week (it's cheeper still if you go for smaller room). The new CofE fees charge £381, adding over a hundred pounds to the most expensive option in a Surrey registry office. Don't we want to encourage people to get married in church? Why on earth does the CofE go to the trouble (and expense) of 'The Weddings Project' to encourage people to marry in church when we then go and raise the fees?! OK, the church bit is likely to be the least expensive part of a bride and groom's 'big day'. But that is not really the point. To me it looks distinctly like the church is profiteering from marriage. When people accuse the church of being obsessed with material wealth, I now have one less reason to disagree with them. The church a worshiper of filthy lucre? Guilty as charged.

Whilst I understand that some fee is necessary for weddings, in the area of funerals, I have no praise whatsoever for the Church of England. Why on earth are we charging for funerals at all? I feel very strongly about this. Every minister that I have ever spoken to has told me of the enormous privilege of taking a funeral. It is the final dignity we can afford to a fellow human being. It is a way of accompanying surviving friends and relatives through their grief and witnessing to the gospel of Jesus, the resurrection and the life. Why, Oh why are we charging people for this? And why is the charge £160? This is shameful. Visiting a council flat to comfort a widow who has just lost her husband of sixty years and helping her prepare to say a final farewell... and then charging her £160!

Less outrageous, though equally astonishing is the proportion of the fees which goes to the Diocesan Board of Finance. Take a funeral at a crematorium with no service in church. Of the £160 fee – £29 goes to the PCC and £131 goes to the DBF. Why does such a large proportion go to the DBF? I am sure they will argue that it is used as a contribution to clergy stipends. But in my diocese, it is made quite clear that churches are supposed to cover the full cost of ministry through the parish share. If the PCC already pays the DBF for their minister's stipend and housing through their parish share, why do they pay again by giving over 80% of the fee for a funeral to the diocese? The diocese shouldn't need this money. The PCC have the strongest claim to it, and even there, I think the morality of charging people for funerals is dubious.

I have a proposal. I would love clergy to organise themselves into something like a trade union, whose members refuse to charge for funerals. The establishment can stamp down on this if there are just a few clergy who refuse payment, but if thousands of ministers refuse to charge for funerals, what is the worst that can happen? They aren't going to sack us all!
Posted by Barnaby Perkins at 10:32 am

But people should contribute to the upkeep of the fabric. Upkeep is a pretty expensive business. That's not central funds - someone has to pay to ensure that the church is there when people want it for weddings and funerals. If only, perhaps, wanted because weddings in church make much better photographs.
And your church does funerals with some style for those that want it - the overnight vigil and all. There's a fabric overhead to that too.