Can my Kit Kat make me unclean? 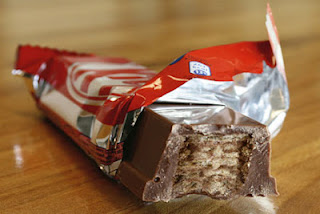 ‘Cleanliness is next to Godliness’, so the old saying goes. The connection between physical cleanliness and spiritual health has been an obsession for religious people as long as there have been religious people. I’m open to being corrected, but I can’t think of a single religion which hasn’t developed codes of religious purity. And christians have been as big a part of this as any. How many of you dabbed yourself with water as you came into church this morning? Maybe you’ve made the sign of the cross one or two times since the service started? Or Perhaps you’ve noticed that shortly before the eucharist part of the service every Sunday, the priest has a little bit of water poured over his fingers? All of these are rituals which we use to make us holy, to make us acceptable to come and worship God.

What is the situation here?
In this reading, we are plunged into a first century Jewish debate. For a long time, the only people required to wash to make themselves pure enough to worship God were priests in preparation for sacrificing at the altar. In the book of Exodus it says “When they go into the tent of meeting, or when they come near the altar to minister, to make an offering by fire to the Lord, they shall wash with water” (Exodus 30.20). But the Torah, the scriptures of the people of Israel, never requires this of ordinary people. For a long time this was exactly the way things stayed; the priests carried on washing their hands and feet before going ministering at the altar, and the people would cary on, eating their dinner without necessarily washing in the confidence that this would not harm their relationship with God. But around the time that Jesus was alive, a group of very sound religious people called the Pharisees began interpreting things differently. They rightly understood that God had made all his people priests (Exodus 19.6), and that the whole of life should be lived as an act of worship to God.

What does the obsession with external ritual purity result in?
That sounds pretty good to me! It sounds a lot like some of the stuff you read in the New Testament. Everybody a priest and the whole of life as worship sounds like just the thing to liberate christians to work for God's new society. It looks great, until you try to work out what it would look like in practice. Then it starts to look less appealing. The Pharisees extrapolated hundreds of rules from the Law about how you could maintain yourself as pure enough for God. They went way beyond the normal demands made of normal Jewish people, like not eating pork, or shellfish. And many of those laws concerned ritual washing: not just your hands, but whatever you had bought from the market, your cups and pots, the couches you would recline at to eat your dinner, the equivalent of ritually washing your dinner table and chairs. They were doing this from a desire to be pure, to take religion seriously. This kind of intensely meticulous life is ok if you are a person of privilege, who has a good education so that you can work out the complex rules you need to live by, and if you have the time and energy to devote yourself to observing all the rules. But common people didn’t stand a chance. In fact the Greek translated as ‘unclean’ in the gospel reading is better translated as ‘common’ or ‘ordinary’.

Intense and pernickety religious and ethical attitudes always result in a religious elitism of one form or another. A moral code emerges which is easy for the privileged to fulfill, but next to impossible for everyone else to get even close to. I have to admit, I think that we run the risk of this when we place a strong emphasis on only buying organic food, or fair trade products. We create a morality which costs wealthy Surrey types very little. I can afford to pay £1 for a bar of chocolate, or £4 for a pack of coffee, or £4 more per kilo for organic minced beef. But by making 'ethical consumerism' a significant characteristic of good christian behaviour, we make pariahs of the people who can’t afford shop ethically. It’s easy to have this kind of morality if you are wealthy. It’s much harder if you are struggling to pay the rent. We should be at least a little suspicious of any ethical code which is easier for the rich to keep than the poor. By all means, be a fair trade shopper, but don't look down at those who aren't.

How does Jesus respond to this?
The Pharisees would not eat with ‘common’ hands, they felt they were better than that, and were amazed that Jesus’ disciples weren’t as concerned about maintaining a pure life as they were. Now here is the really revolutionary thing. Jesus could have responded simply by saying that the Pharisees had invented a bunch of laws which hadn’t come from God which therefore, nobody needed to obey – after all, God is the only one who can bind our consciences. But instead of doing this, Jesus goes much, much further: “Then he called the crowd again and said to them, ‘Listen to me, all of you, and understand: there is nothing outside a person that by going in can defile, but the things that come out are what defile... For it is from within, from the human heart, that evil intentions come’” (Mark 7.14-15, 21). Jesus teaches that external things make us neither pure nor impure. ‘Impurity’ comes from the human heart, from from its motivations. One of the verses the lectionary compilers unhelpfully leave out is religiously explosive, it says that Jesus ‘declared all foods clean’ (7.19). Jesus cleanses everything, from lobster to Kit Kats. He removes the distinction between sacred and profane, between holy and common, between pure and impure things. God created all things and he created them good. Nothing he has made can make us unworthy of worshiping him.

The food we eat, the way we worship, the rituals we perform, the people we associate with, radio or TV channels we follow, the newspaper we read, the music we listen to: none of these makes us either pure or impure. God loves us. And we respond to that love, not by panicking about whether we are religiously acceptable to God, but by being doers of the word, as we read in the epistle of James. By loving others as he has loved us. So as we go into this week may we remember that God is interested in our lives being motivated by love, in caring from the orphan and widow, the stranger or homeless person. God is interested in our living lives of love, not in how fervently or frequently we make the sign of the cross.

Posted by Barnaby Perkins at 4:10 pm