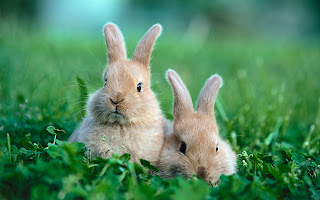 For the last couple of years I have gone to the Easter vigil at Guildford Cathedral to present candidates for confirmation. Imagine a huge church, full of people, most of whom will be slightly puzzled by the strange and elaborate ritual which is going on around them, some of whom might have very little understanding of Christianity whatsoever - and there is the bishop, ready to give a sermon, something uplifting and memorable. Imagine my horror then, when last year, the preacher launched into a tirade… against the Easter Bunny. Don't get me wrong, I have a lot of respect for my bishop. But really… the Easter Bunny? … The poor, helpless, fluffy, pom-pom tailed, chocolate giving Rabbit of Easter? The bishop, by the way, preferd the humble Easter Egg as a symbol of the new life of the resurrection. Anyway, this attack on the Easter Bunny stuck with me all year. I suppose it was at least memorable! So as we are in the season of Easter, I wanted to present the case for the defense: Why is the Easter bunny, not only a legitimate symbol of the resurrection, but better an inherently better one than the Easter Egg.

I don’t really blame the bishop for preferring the egg to the bunny. The egg is rather obviously a symbol of new life. To appreciate the bunny as a resurrection symbol you have to think like someone from the middle ages. Medieval monks used to look at the world around them as closely as they could, they would look for signs of God in trees and plants, in mountains and stars. And, in ways which seem quite amusing anyone who has learnt even a modicum of science, they looked for God's fingerprints in the behaviour of the beasts, tracing the hand of God in his creation. They would compile books called bestiaries, which tried to unpack the religious significance of the beasts. The Pelican, for instance. A noble bird which the medieval monks believed, in times of famine, fed its young with blood which it would draw from its own breast – a symbol of the Son of God giving his body for food to the faithful. What an honorable creature the Pelican is, a fitting symbol of the Eucharist. Of course, they had got it all wrong but, hey, it was a good story.

Then we have the somewhat less nobel rabbit. The rabbit doesn’t sacrifice its life, or selflessly serve its neighbor. The rabbit reproduces. In fact, the rabbit is such a prolific breeder that medieval monks thought that rabbits were hermaphrodites and could just reproduce whenever they wanted. So whilst the egg may be a symbol of new life, but the bunny is a symbol of abundant, overflowing, uncontrollably generative life. And that is why I think the Easter Bunny trumps the Easter Egg. An egg contains one, new life, but if your think like a medieval monk, a rabbit contains inexhaustible life. A rabbit isn’t just alive, it has the capacity to give life to lots and lots of other rabbits. This serves as an analogy of Jesus Christ, who when he was raised from the dead, was not merely alive, he was alive in such a way, with such an abundance of life, that he can give life to the whole universe.

Posted by Barnaby Perkins at 9:49 pm