Archbishop of Canterbury? Who Cares? 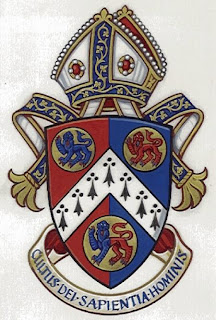 I know that the decision about the Archbishop of Canterbury is the closest the Church of England ever gets to having news which is genuinely newsworthy, but am I the only person who is beginning to get fed up with the endless media coverage and ridiculous speculation? I'm beginning to wonder how important I think the Archbishop of Canterbury really is. I'm even getting annoyed that people are referring to him as the ABC. Frankly, the thought that the process might actually drag on for months is more that I can bear.

But it's not just the irritating media coverage. I find the candidates bland generally. It looks as though the choice is ultimately between an inexperienced conservative from Durham (you might as well elect a really, really good vicar) and a cringeworthy self publicist from Norwich (N.B. Graham James: Nobody believes that you've prayed not to be the next archbishop – his announcement reminded me of the archdeacon from Rev. when he was being considered for promo... I mean a new servant ministry. Nolo Episcopari? If you don't want the job, take your name off the list).

There is something rather unpleasant about the whole business. I think Giles Fraser (here and here) is spot on in suggesting that the secretive nature of the decision makes it look like an establishment stitch-up. Why should this be something done behind closed doors? Why do we assume that a tiny group can discern the best way forward better than the church itself?

Some might dismiss Giles Fraser's concerns as of no interest to anyone outside fairly rarefied church circles, and I'm sure to an extent they would be right. Our church, its structures, its worship and its teaching are becoming so irrelevant to life in twenty-first century Britain that I wouldn't blame anyone for ignoring us completely. Nevertheless I do wonder how non-religious people feel when they see the way we go berserk over church leaders and leadership contests? I wonder what they think when they hear a 'front runner' for the leadership of the Anglican communion saying that it is a job with, "lots of expectation but relatively little power". Perhaps they are not surprised that religious leaders are power hungry, or that church hierarchies tend to resemble groups of desperate people, clambering the wrong way up an escalator. But I am equally sure that, however residual popular knowledge of Christianity might be, most people realise that this is not the kind of behaviour which Jesus promoted.

At holy communion this morning, we read these words from Luke's gospel:

Perhaps if bishops, priests (including me) and deacons took this seriously, the church would start looking like an organisation that could do real good, that could address much of the imbalance and injustice that we see in the world. Until then, I think we'll continue to look like the establishment that most people increasingly distrust and resent.
Posted by Barnaby Perkins at 12:59 pm

'With respect', I don't think this is quite right.
In my day a dud school was transformed into one of the country's leading schools more or less because of the charisma of the Head. Staff the same, buildings the same - - -but! So, I concluded, the head man does matter. It seemed silly, still seems silly, but that is how God devised society seems to work.

Is this, then, what Christ had in mind? His instruction to spread the Gospel needs not just the Barnabys of this world to talk, but listeners, and they-out-there are more likely to listen if they have a trigger. 'His fame went before him'. So I think I care.

But after that, I don't know the candidates and am unable to comment, even if I should.

Come back, Wesley, all is forgiven?

Ian,
The title is deliberately provocative, but doesn't full convey my feelings. I agree with you. I think we need someone with charisma and an ability to communicate. I just don't see anyone like that among the front runners. All this leads me to think that most people will be looking on in wonder at the way that we choose the next archbishop. I do care that we get the right person. I don't care for any of the candidates, unfortunately. Hope that explains my position better.