What do we want Jesus to do for us? 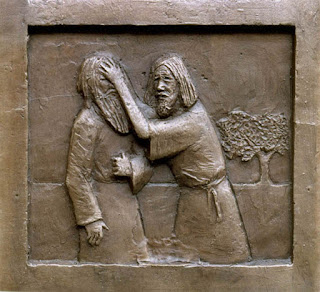 A few years ago I spent a little while living in Rome. One of the things get used to quite quickly in a big Italian city like Rome is the large number of Beggars. They are often run by gangs who exploit, and sometimes even cause their multiple disabilities to make money. If you get up early enough in the morning you can see the gang bosses dropping the beggars off on street corners for a long, cold, lonely day of begging. Most people give them a fairly wide birth, a few kind, or perhaps naive people, throw them a few coins, hoping that it will make their situation better, but half suspecting that ultimately, this will just go to the people who are running them. Their muffled pleas for money and hunched posture tell of a lives which lack wealth, friendship, dignity. This is the kind of person which Jesus meets on at the gate of Jericho as he travels to Jerusalem. Bartimaeus, the kind of person people cross the road to avoid.

And yet Mark portrays Bartimaeus as the ideal follower of Jesus, the ideal disciple. But hold on. Isn’t this just a story about a wonderful miracle? Aren’t we reading too much into this lovely, though ultimately inconsequential tale, if we say it’s all about what makes a good follower of Jesus? I don’t think we are reading too much into it, mainly because Mark, like a skilled writer, gives us clues which refer back to earlier parts of his story about Jesus. I want to rewind back to two stories Mark tells of failed discipleship and to think about he contrasts them with this poor, blind beggar:

1) A couple of weeks ago, we heard the story of the rich young man, who came to Jesus asking how he could inherit eternal life. Jesus advised him to keep God’s commandments. The rich man man, who also turns out to be extremely devout replies that he has kept all God’s commandments from his youth. Surely, this man was an outstanding candidate to inherit eternal life if ever there was one. But Jesus looking at him with love in his heart, said that he lacked one thing. To be truly righteous he had to go, sell everything he owned, give it to the poor and then follow Jesus. And the man walked away sad. The only person we read of in the gospels who meets Jesus, receives his call and goes away sad, because he couldn’t leave his possessions behind.

But here we find Bartimeaus. A man with nothing of any value: landless, disabled, but with a belief that Jesus, the son of David could help him. A belief he will not let go of, even when people tell him to shut up and stop bothering Jesus. Then finally, Jesus call on his life comes. What does Bartimaeus do? Gather up his scraps of belongings and drag them with him to meet Jesus? No. Bartimaeus, ‘throwing off his cloak… sprang up and came to Jesus’. Now that might seem foolish. This was probably the one outer garment he had, the only thing to fight of the cold. It could also have been the object he spread on the ground to collect the coins the charitable rich threw to him. And as a blind man, once he had cast it off he might easily have lost it for ever. But Bartimaeus wanted to meet Jesus, and believing that Jesus could answer his request probably felt that he would soon have no need for a beggars cloak. He cast aside even the little he had to follow Jesus. This is the path of a true disciple.

2) The second story of failed discipleship I think Mark wants us to think of comes just after the story of the rich young man. Two of Jesus followers, James and John, the sons of Zebedee came up to Jesus and said “Teacher, we want you to do for us whatever we ask.” Quite a request to make to the son of God! But Jesus humours them, “What do you want me to do for you?” Jesus asks, the exact same questions he asks Bartimaeus. “What do you want me to do for you?” Jesus followers reply ‘Grant us to sit, one at your right hand and one at your left, in your glory.’ They want power and influence because of their relationship with Jesus, and by that request show that they still fail to see what Jesus is really about. “What do you want me to do for you?” The blind man said, “My teacher, let me see again.” And asking for his physical sight, Bartimaeus receives that and much more, he receives the spiritual sight which the disciples lack. Jesus dismisses him but he will not listen, having cast aside all his possessions, “Immediately he regained his sight and followed Jesus on the way.” For Mark, ‘on the way’ always means, ‘on the way to the cross’. He sees what the other disciples cannot

Bartimaeus, a blind beggar, the model disciple, our teacher on the difficult, joyful journey of following Jesus. He shows us what a follower of Jesus looks like: A person of humility, persistence, courage and willingness to take risks. A person who is waiting to follow Jesus wherever he goes, and is willing to throw down anything which would keep him from following.

And so Jesus’ question is one that we need to ask ourselves too. ‘What do you want me to do for you?’ Why are we here to meet with Jesus? What do we want from this? To take time to work out what we really want as individuals and as a church is incredibly important. Will our answer betray similar motives to the disciples, or the rich young man? Or will we learn from Bartimaeus, and be people who want to see, to see Jesus, to see his vision of God’s kingdom, and cast aside anything which will keep us from seeking it.
Posted by Barnaby Perkins at 2:16 pm